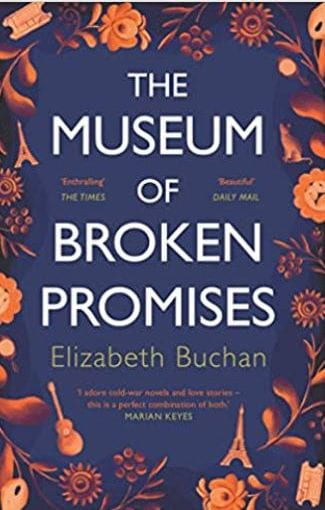 I am not sure I could bring myself to visit the Museum of Broken Promises – too much heartache and suffering. There’s the wedding veil of a woman who was in love with her bridesmaid donated by her husband. There’s the golf ball from a local community who saw their nature reserve broken up and destroyed for a club house. There are a small pair of shoes for a baby donated by the father without the mother knowing. There is the pillowcase embroidered by a girl as part of her dowry in a marriage to a husband who beat her. All broken promises.

The biggest broken promise in the museum though is that of Laure Carlyle the curator which is an unused train ticket and a stringed marionette. The tale of this broken promise is slowly revealed through the life of Laure from her nannying in communist Prague in 1986 to the present day in the museum. The story is told through the twin tracks of the two times with a slip into Berlin once the wall had come down.

It is a story of love in many forms, survival and the difficult notion of who is watching whom. The book does capture some of the many ways that the communist secret police, in this case the StB, and those who worked for the party disassembled, made citizens doubt their own thoughts, gaslighting to give its current parlance, and how people can be denounced. And it isn’t always the people you expect it to be.

Buchan says that she wrote the book after visiting the museum of Communism in Prague – the whole idea of communism is a broken promise, isn’t it? In it there is a small cell with a black phone which rings as you step into the room. I can’t imagine what it must be like to live slightly on edge day after day, hoping that your phone doesn’t ring and hoping that your phone works because if it doesn’t you are being given a message.

I also really enjoyed the theatre of marionettes and the way traditional tales were told but which had many layers of meaning, often subversive and a way of maintaining your language and traditions which are often subsumed into a large blandness under communism, and this was particularly well-told in the story. As was the use of rock music.

Stories like this need someone or an event to unlock the past of the main character and in this case it was May, a freelance journalist from America who doggedly pursued Laure to find out what and why.

She raises a hand and places a finger on Pierrot’s chest, searching for the heartbeat that is Tomas.

Her long path to consolation is traced.