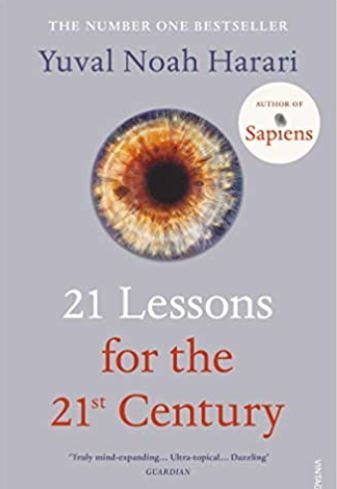 I found 21 Lessons for the 21st Century by looking through the books that the Rebel Book Club had previously focused on and it was in my local library too, not something that happens often with non-fiction books. The Rebel Book Club is a non-fiction club and offers a real sense of community both online and in-person. (I am not a member but I like the sound of it.)

The book consists of articles written for a newspaper which accounts for a bit of repetition and was often in response to something a reader had asked or suggested. It is a thought-provoking book and I don’t think I have read anything quite like it before.

First of all, I don’t think these are lessons – they are more places to start a conversation because there aren’t many answers in the book. What Harari does do extremely well is move through areas of concern for many of us such as terrorism, migration, nationalism, identity and post-truth, sharing a historical and political overview and then opening up the conversation for us to continue outside the book. He is a master of summarising and sweeping statements.

So, here are my 21 thoughts about 21 lessons for the 21st century. Some are quotes that resonated with me, others are thoughts or opinions on what has been said.

I am off to see if there are any Permaculture groups in Devon.

I think this is a possible book club choice because there is so much in it to discuss and agree and disagree about.