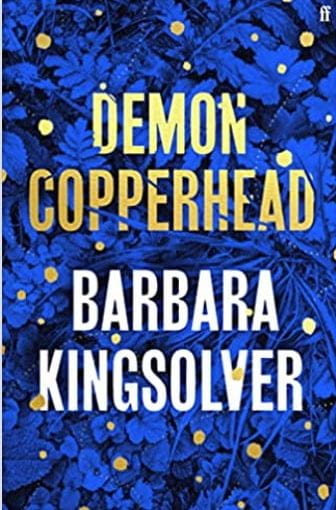 I don’t know the story of David Copperfield although I do know a few things about Dicken’s writing: a focus on social injustice; poverty and the effects on children and the black holes in society that allow this to happen. As a writer, I know he likes to play with names such as Mr Feziwig and Bayham Badger and I also know that David Copperfield is narrated by Davy and spans his life starting with when he was born.

Whether I shall turn out to be the hero of my own life, or whether that station will be held by anybody else, these pages must show.

And so it is for Demon Copperhead and one of the questions that you want to answer as you start the book. Demon is a child who is failed by everybody – his parents, child social services, foster carers, sporting coaches and other children and from an early time only had himself and his friend Maggot to rely upon. How his friend became known to be Maggot is most definitely worthy of Dickens himself. This is also a story of the massive drug problem with OxyContin and Fentanyl amongst others and how they have ravaged society particularly in Appalachia where this book is set.

I did enjoy Kingsolver’s description of Appalachia especially in the early part of the book where Demon is a relatively carefree child roaming the land around him with his friend, playing in the creeks, knowing the mud at the bottom as the best mud anywhere and having his neighbours, the Peggots, as a safe place to go when it all got too much.

The story is narrated by Demon and he is a lively, optimistic narrator that prevents this book becoming a drudge of one failure after another – and it is a long book. There are parts that are almost too painful to read: the social workers who took Demon to the foster carer’s farm and argued over who should take him in there because they were scared was very difficult as they knew this was child abuse in terms of care and slave labour but they still handed him over. Very few institutions come out of this book well.

You are left with hope at the end of the book but it takes a very long time to get there. I didn’t enjoy it and although I admire the idea of reworking David Copperfield, I do wonder if you can get too hung up on how this book links with that one rather than concentrating on what Kingsolver is writing about and the quality of what she has done as a standalone novel.