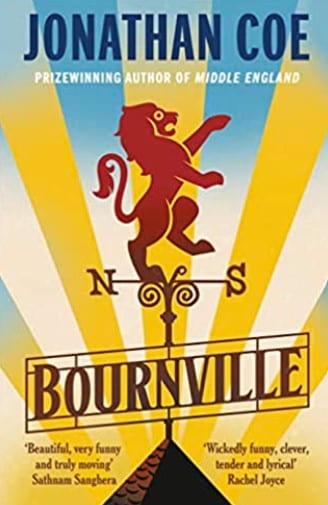 The premise the book is built around features as a quote on the back cover.

It was the time of the Queen’s silver jubilee, I remember, and for a while it seemed everyone was singing either the national anthem or ‘God Save the Queen’ by the Sex Pistols. It was somehow wonderfully revealing of your national character that these two songs could be on everybody’s lips at the same time . . . I felt there was an energy and inventiveness in Britain that you didn’t encounter anywhere else in Europe, and all done without self-importance, with this extraordinary irony that is so unique to the Brits. And now this same generation is doing . . . what?

This is a state of the nation book addressing how we have got to where we are at present with a focus on our relationship with Europe.

The book spans 70 years following the character Mary from childhood to death and everything in between but diving in at seven important moments in the royal calendar from VE day in 1945 to its 75th anniversary. But this is also a story told through chocolate; the chocolate of Bournville and how the factory and place has also changed during those years.

The structure of the book is really important to the telling of the story. The diving in at particular points in time emphasises changes which are normally just part of everyday life but seem bigger, more momentous, when viewed from afar. Mary’s family was an all white family with no divorces at the start but by the end included people of colour and different sexualities.

The exploration of our relationship with Europe starts with the end of the second world war and Germany with a German relative attending the VE celebration and being attacked by young men. This then rumbles on through the various times moving into a relationship with Europe rather than just Germany. Each of Mary’s three children has a completely different outlook on events and so we get a spectrum of points of view.

I am the same age as Coe so have lived through many of these events and have to say that I found my life represented in this book particularly because I too came from this area of the country and know well the places he mentioned. Bournville was really only a place we passed through on the train to get into Birmingham but there was Barnt Green, Longbridge, Selly Oak, Moseley and my home town of Redditch. This meant that particular events really struck a chord – the launch of the Austin Metro and its awful televison adverts harping back (and looking forward) to the time when we would ‘beat’ the rest of the world – bring on the white cliffs of Dover.

The story is told in first person, 3rd person and contains a range of forms such as letters and reports and these serve the story very well, emphasising the different points of view or the ridiculousness of the situation. Whilst the family are watching the funeral of Diana, we get each of their thoughts which range from Ooh that’s a nice kiss to Mary’s husband quoting Latin poetry about marrying a virgin and celebrating idols. One of Mary’s children, Martin, ends up as the representative of British chocolate in Brussels, trying to change the EU laws around letting Cadbury’s chocolate onto the continent. Of course, the chocolate contains vegetable fats and did not have enough cocoa solids and so wasn’t considered ‘real’ chocolate. How did it come to be so different? Well, during the second world war we couldn’t get enough cocoa solids so had to add something else to the mixture and that was vegetable fats and the taste stuck.

The EU Report on a meeting of the Environment and Consumer Affairs Committee at the European Parliament on 2 July 1996 was hilarious. (I did a quick check to see if it was real but couldn’t find it.) It lists and details the various countries responses to allowing British chocolate and exemplifies some of the reasons why people voted for leaving. The Spanish argued for clearer labelling about non-cocoa vegetable fats, while France and Belgium thought the labelling should say ‘not real chocolate’, the Germans wanted a standard which there chocolate met but the British didn’t and then it tumbled into a farce that makes you laugh out loud with the silliness and the recognition that we do think like that.

Technology was only mentioned in passing and I do think that this has had a significant effect on the ways in which people think but I suspect the book would have been enormous if the same attention had been given to it. I am also not sure that the Welsh and in particular the Scottish would say this was about them – is it British or Englishness we are talking about? , Whichever, I loved it!