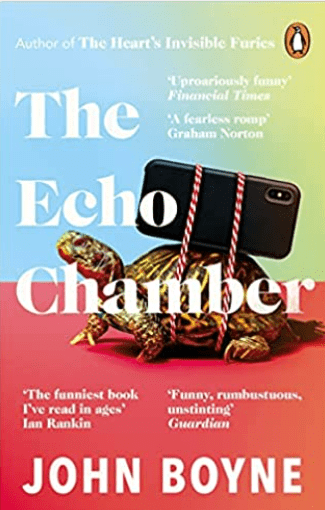 This book made me snort out loud on many an occasion as I was reading it and at times I had to stop and laugh loud and long. It’s not subtle but it is funny.

The story tells of the dysfunctional Cleverley family who are firmly attached to their phones and the impact this has on their behaviour and relationships. George Cleverley, the father, is a ‘National Treasure’ at the BBC, Beverley Cleverley is his wife and a renowned author who no longer writes her own books but has the ‘ideas’ and gets a ghost writer to do the work, and their three children Nelson, Elizabeth and Achilles. Of course these three also have their problems – Nelson can only go out in a uniform, Elizabeth is too busy trying to be an influencer and Achilles is a blackmailer. The thing they all have in common is their attachment to their smart phones and of course, it is these that gets them into trouble.

‘What I mean is that I want to be an influencer.’

‘But this is how you influence people. By gaining as many followers as possible and making them believe in you, even if you have no knowledge or training in your paticular subject. That’s how Jesus did it, after all. And look at Chritianity. It’s huge.’

‘Only because it wasn’t around then. But can you imagine if he had tweeted from the cross?’

‘Dying,’ said Elizabeth, looking into the distance as she considered this.

‘Nails in my hands and feet. Back in three days. In the meantime #BeKind.’

‘Exactly. Or if he’d made a Tik Tok and posted it as he rose from the dead?’ What about an Instagram video of him turning water into wine? Content like that would have broken the Internet. Hashtag Messiah.

George starts it all by getting the gender wrong in a tweet about someone who is transitioning and it goes downhill from there. Whilst he unravels, so does the rest of his family until they are all ‘cancelled’.

When I think of satire, I always think of Hogarth’s paintings where he tells a story, uses caricatures and parodies social behaviour all of which is held firmly beneath codes in his art. He was the chronicler of morality of his times. In a way The Echo Chamber is Hogarthian in its chronicling of social behaviours, caricatures of people and parody. This is definitely a book about being woke, about being an influencer, the number of likes you have for a post and about trolling. At certain points in the book I had a picture of Boyne letting rip with his own rant about people jumping on the bandwagon to criticise others online and seeing his fingers flying across the keyboard as he gave vent to it in the disguise of George Cleverley. I understand that he wrote this book after a bit of an online furore over his last book for young adults, My Brother’s Name is Jessica.

Having only just read The Heart’s Invisible Furies as a book club choice, there are things that Boyne obviously likes. He does write a naive character well (when does naivity become ignorance?), and he likes characters that are connected to each other and keep reappearing. Andrea Gosebourne in The Echo Chamber is George’s lover who thinks she is pregnant, ends up being Nelson’s therapist and bumps into Beverley and gets one of her books autographed.

There is an undeniable swipe at authors who don’t write their own books – it has become something of a trend amongst really famous authors – who see writing as a comoditiy that can be farmed out to others. My ideas but your writing. Who cares. It will still sell well, although I think the Child brothers might have had a sticky start to this way of working with their Jack Reacher books. I did wonder with the title of their latest book, No Plan B, whether that was really Lee Child telling us, this is going to happen – my brother will write the books despite what the critics say.

If you need a pick-me-up that will make you laugh and you are not easily offended (therein lies the irony!), this book should do it.