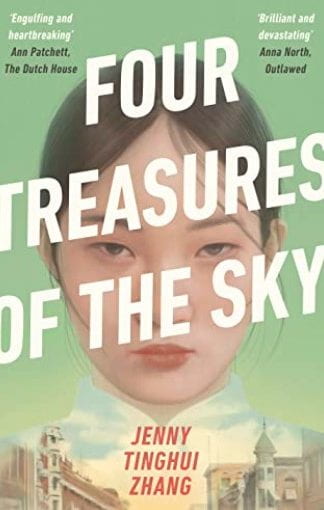 I am constantly amazed at the quality of people’s first novels. I know it isn’t the first thing they have ever written, but like the others this is an incredible first novel.

Based on a real incident in America, this book set in the 1880s tells the story of Daiyu a young girl in China who hates her name and blames all her troubles on it. Her parents disappear and her grandmother dresses her up as a boy and sends her off the the local city as she knows that Daiyu isn’t safe at home. She travels as a boy and finds a place at a calligraphy school where she is allowed to sleep in a cupboard and falls in love with calligraphy.

However, whilst out in the fish market yearning for some fish, she is caught by Jasper who trafficks her to America. It turns out that America passed a law saying no chinese women could enter the country and so chinese grils who look like boys stand a greater chance of entering. She ends up in a brothel but escapes finally ending up in Pierce where she settles with a couple of men who she helps in their shop. And it is here that she falls in love with Nelson a Chinese American.

Tines are hard, and of course one of the key factors in racist behaviour is economic hardship. The shop is targeted for protests and eventually the owners, Daiyu and Nelson are accused of murdering the owner of an American general store – soemthing they didn’t do. People refuse to stand up and help them and then the law in the form of the sheriff allows a gang of men to take the group away and hang them.

The book focuses on Daiyu and how she survives using the lessons of the Master Calligrapher but she is also accomplanied throughout by the ghost of her namesake from mythology who offers guidance and support until Daiyu can stand on her own. At times of great trauma, Daiyu disassociates from her body and watches events, looking down on them from a height although I found it more difficult to read when Daiyu swallowed the ghost and took on her characteristics, standing up for people and fighting back.

For much of the book Daiyu is dressed as a boy and was never able to be a girl or woman.

Since the beginning, being myself has led only to darkness. Instead, I practice erasing and overturning and re-creating the self until all I have to do is disappear.

As with other themes in the book, dressing and hiding yourself has great relevance today and I am unsure whether more could be made of this. It does feel a bit like a lost opportunity.

That aside, the book is a page turner and I read it in a day, only putting it down to eat.