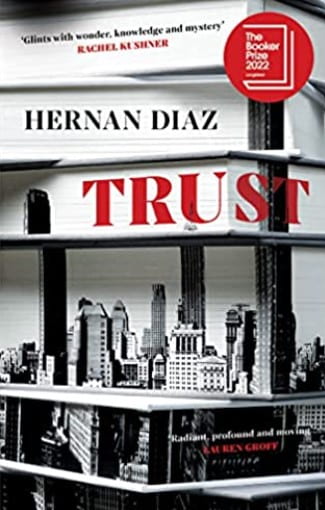 ‘Can you believe it? The imaginary events in that piece of fiction now have a stronger presence in the real world than the actual facts of my life.’

There is a reason that this book has appeared on so many ‘Best of the Year’ book lists and that is because it is fantastic. I love a clever book and this is very clever.

At it’s heart, this is the story of a couple in America during the early 1900s and beyond in the build up to the financial crash and depression. Two young people, Andrew and Mildred, meet, both of whom have had unusual childhoods and find in each other something that the rest of their family and society don’t give them which is time on their own, peace and solitude and so they marry. The implication is that the marriage is ‘chaste’, no children are produced but what does occur is that more money is made than at any other time in both their families and the crash was anticipated by them and so they prepared for it by selling their shares etc. Once the crash had happened they became the pariahs who society believed had brought the economy down single handedly. Eventually, Mildred becomes ill, retires to a sanatorium and dies

The book is structured into four narratives; fiction, autobiography, memoir and journal and as you read further into the book, each of these narratives overlaps and reveals something else about the story. So, this book is a historical novel about a time in American life where the ‘bubble’ burst from different points of view but it is also so much more.

One of the very clever things that Diaz has done is to link the financial world to the world of fiction – not an easy task and not one that we would all make the connections with. Included in this is the word play of terms that you find in the financial world but also outside of that sphere such as bonds, futures and ultimately trust.

The first narrative is fiction and is a thinly disguised account of Mildred and Andrew’s life where their names have been changed but the story is theirs written by the author Andrew Vanner. It illustrates beautifully the bonds between husband and wife when they work together but also shows how easily those bonds can be broken both between husband and wife but also between the couple and the society they inhabited. One of the saddest sections of the book was the notes sent to Mildred excusing her ‘friends’ and aquaintances who were withdrawing from her social circle as the Bevels became the pariahs of the crash.

You know how consumed I’ve been with work – lectures, reviews, articles, et tedious cetera. Everything seems to conspire against my writing. And I do need to finish this manuscript. I am ever so sorry, but I will have to bow out of the reading program at your lovely library for the remainder of the year. Please do wish me good luck with the wretched novel of mine!

The second section of the book is a partially finished autobiography by Andrew Bevel. Here he tells his own story but it is unfinished. There are sections where more detail is to be added particularly about his wife.

When we get to the ‘Memoir, Remembered’ written by Ida Partenza, Bevel’s secretary, the story starts to unravel and more is revealed.

‘Can you believe it? The imaginary facts in that piece of fiction now have a stornger presence in the real world than the actual facts of my life.

It turns out that the autobiography is ghosted and large parts are left upto Ida to create or manufacture and so now as the reader, we ask ourselves, ‘Where is the truth?’

The final section is the lon lost journal of Mildred Bevel where she details her life. No one in the museum that the Bevel’s home has become can read her writing so no one has bothered to read through her papers to find out anything about her.

So, this is a book questioning where the truth lies but it also turns out to be a book about how a woman is written out of history – her part in the successes of great financial accumulation and survival in a marriage which is not really a marriage.

‘. . . I am writing this book to stop the proliferation of versions of my life, not to multiply them. I most emphatically do not want more perspectives, more opinions. This is to be my story.’

p278 As spoken by Andrew Bevel

Although told as a historical novel, much in this book has relevance today: Trump and his fake news, The Royal family and The Sussexes alongside others, Ultimately, we are asked to question who do we trust, and I have to add after that the word most? Strangely, fiction does reveal more of the truths than we might think but can also mislead us.

Fantastic, definitely a book for a book club discussion. It should win a prize or two in 2023.