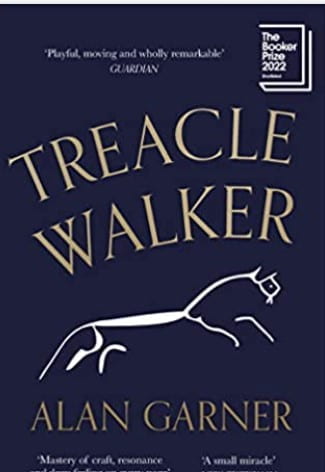 I came to the previous author, John Boyne, not thorugh his books for grown ups but through The Boy With Striped Pyjamas that was for young adults and so I come to Alan Garner through his children’s fiction – The Owl Service and The Wierd Stone of Brisingamen. And this book continues some of the themes and ideas that he has been exploring over his 87 years on this earth.

Garner is an author who brings myth and folklore into his story-telling along with language that rolls around the mouth and this book is no different. Joe, a child who is recovering from some illness, heres a Rag and Bone man calling and eventually goes down to meet him. In exchange fro his old pyjamas and a sheep’s bone he chooses a small pot with a bit of ointment left in it and a stone with a horse engraved on it. These objects are important to the story. Spenidng long hours in bed, Joe reads comics and finds that they burst off the page and into his life – The Brit Bashers and Whizzy the Wicked Wizard.

The landscape the story is set in is mythic: meadows and ancient forests, valleys and bogs. The bog reveals Thin Amren, a man wearing nothing but a leather hat. It is Garner’s beloved Cheshire.

It is a very short, but complex novella that took me a little while to understand what was going on because the language was so unusual. In medieval times treacle meant medicine so TreacleWalker is there to cure Joe of his lazy eye and to help him ‘see’ in all its meaning.

The story plays around with time where we can speed it up and slow it down depending on relative motion. We also know things that make time go really slowly and those that whizz past and never last long enough. This is an unusual combination with folklore

A strange little book but one that might bring all of Garner’s thinking together in one story. I think it might even be a bit biographical because I understand Garner was ill as a child and spent a lot of time staring at the ceiling making stories up.

This book would make an excellent book club choice becuase it is quick to read, you may need to read it twice, but there is so much to discuss.

My questions would be:

Have you ever read any of Garner’s other books, including those for children? What were they about and were there any links with this book?

How are seeing and Joe’s lazy eye relevant to this book?

The quote at the start of the book by Carlo Rovelli says ‘Time is ignorance? Why is this relevant to the book?

What did you think of the language in the book and the word play? Do you have some favourite examples?

Why weren’t Joe’s parents present in the story? Was Joe dead or alive?