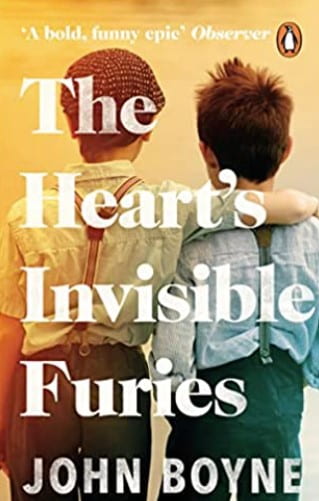 This is our next book club choice and with a few days to go, I am almost finished. I realised as soon as I read the first couple of pages that I had already read the book so coming back to it for book club means that I will think about it a bit more as I read and get more out of it.

It is an epic set in Ireland over about 70 years documenting the life of Cyril Avery, a gay man who was adopted as a baby and raised by Charles and Maude. Although they as somewhat distanced parents had a significant impact on Cyril which helped to shape him, what comes across most is how a country can shape a person, particularly when they do not fit in with society’s norms. Whilst telling us about Cyril, the book also charts the changes, or not, in Irish society around homosexuality.

Cyril is born to an unmarried mother who has to leave home and witnesses a gay man being killed by his father. Her son, Cyril, is adopted and raised by a couple who could not be less interested in Cyril and remind him at every step that he is not a ‘real’ Avery. Cyril becomes friendly and falls in love with Julian, an outrageous hetrosexual, who thinks of sex all the time and who I was sure was going to turn out to be gay because ‘he doth protest too much’ .Julian has a sister who has been jilted at the alter and Cyril agrees to marry her, does so and then runs away at the reception still having told no one that he is gay. He moves to Amsterdam where he meets his partner who is a Dr in sexually transmitted diseases and eventually they move to New York to work in a hospital on the Aids wards. It is here that Baastian, Cyril’s partner, is beaten up and killed, sending Cyril back to Ireland and back to his life where he discovers he has a son.

The book is downright funny, often at the most poignant times and had me laughing out loud. Early on in the book we find out about Charles Avery, p87, from his monologue and it is very funny and very horrible with his pages of ramblings about how he hates monogamy, how his first wife died, what marriage means to him and how he met Maude. All Maude says about their first meeting is:

‘I really can’t remember. \it might have been a Wednesday, if that’s any use to you. Pr possibly a Thursday.’

And then, towards the end there is the time when Cyril and his ex-wife Alice are sitting in the hospital waiting room whilst his son has his second child and they meet their daughter-in-law’s parents, Peter and Ruth. The backwards and forwards of the conversation is excellent as is the observation of the bigotry of the couple who know that times have moved on but can’t quite move with it. As the conversation moves on with phrases such as ‘gay homosexuals’, ‘Your people read a lot, don’t they?’ and much more including referringto ‘darkies’ whom he used to employ, ‘some of my best friends…., etc we get to the nub of the conversation after about three pages of this.

And you know he wanted us all to watch The Sound of Music in the afternoon. It’s Steven’s favourite film.

So even here, Boyne brings all the stereotyoes of gay people to bear on the book to make fun of the couple and we as the reader know something the parents don’t or refuse to admit to which makes it even funnier to observe.

At a couple of points in the book there are quotes such as ‘We’re none of us normal.’ but Cyril really is normal – caring, compassionate, loving, and a good father.

There is also the section where Cyril visits his father (adoptive) in prison and sits next to a woman who maintains that her son did not commit the murder he was found guilty of. There was not a jot of evidence apart from the DNA, fingerprints and eyewitness! Oh, and there was the priest who had a heart attack after listening to what Cyril would like to do to other boys. You can hear Boyne reading this part here

So, what were the heart’s invisible furies? As already mentioned, bigotry, prejudice, priests and the church, politicians are lambasted in this book and possibly authors as well.. Underneath it all, it is quite an angry book but done so cleverly.

There are many coincidental meetings in the book – Cyril meets his birth mother, without knowing it, several times and other characters come round again such as the link beteween his mother (adoptive) and Alice the woman he married. Alice is writing her PhD based around Maude Avery. I like to think of these coincidences as the way Irish life works. i once watched/listened to two Northern Irish people meet each other in our office at work pulled in by hearing each other’s accent. They then proceeded to sit down and work their way through everyone they knew until they hit upon someone they both knew and then had a conversation around that person that moved out like ripples after a stone thrown in to the pond. I think the coincidences are like this conversation.

This is an excellent book and a great choice for a book club.

Questions that I am left with at the end of this book.

Why does Maude not want her books to be read by everyone?

Why are the furies invisible? They seem to me quite visible but perhaps that is only because I am reading this book in 2022 when many institiutions have had to change and social media can call them out much more easily. Or are they invisible because you hope you are hiding what you really are?

Are there other examples of ways in which a country and it’s society shapes a person? Is it more visible when a person is on the edges of society for some reason?

At the start of the book where we see through Cyril’s eyes, he is quite a naive narrator. Why does Boyne use this device?

The friendship between Cyril and Julian is quite a common one in literature (and life?) – the outgoing, lively one and the follower. Do you know anyother literary friendships like this? How do the dynamics of this friendship affect the story? Do the dynamics remain the same throughout the book?