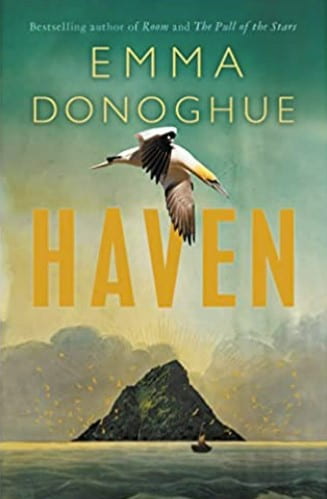 I have no idea what I was expecting when I picked this book up in the library but it wasn’t this. A prior and two monks leave a monastery after a dream of the prior where he believes he is told by God to travel to an island and live there in isolation, following God’s rules.

They set off in a small boat and land on Skellig Michael, a small rocky island off Ireland which is covered in birds, has no running water and is vertiginous. They then set about building shelter, obraining food and surviving whilst trying to copy books and it is here that it all goes wrong. They manage to kill all the auks on the island, cut down the only tree and generally devastate the ecology of the island. The Prior becomes rigid in his understanding of the rules which apply to the worship of God and then there is a devestating revelation about Trian, one of the monks.

This is a depressing message about how we ruin everything, can’t live together and how easy it is to twist and harden religious ideas until they become excluding and you end up on your own.

Donoghue’s writing is wonderful at times, particularly when she is describing the landscape:

The heart-shaped leaves of aspens rattle, giving off a sweetness that mkaes him snuff the air with pleasure. Downey birch and willow are woven thick on the banks in the first haze of Eastertide green. Tall alders dangle reddish catkins against glossy ovals gthat have only just opened.

I can also appreciate the research that has gone into this book – medieval religiosity is not something that is uppermost in most of our minds. The book tells of a real place with a small retreat for monks and tries to imagine how it came about and what it must have been like.