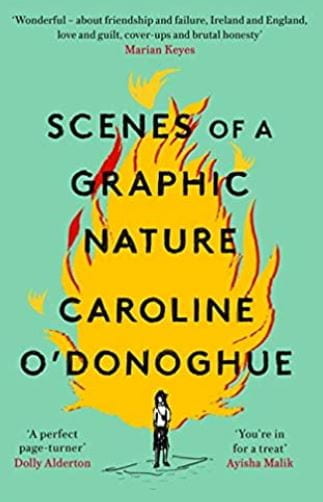 I nearly didn’t read this because of the title and because Dolly Alderton had a quote on the front but I am glad I did. It is a mix of mystery with a history of Ireland.

Best friends, Laura and Charlotte, make a film about Charlotte’s Dad and then visit film festivals where it is showing. Charlotte’s Dad is Irish so when the Cork Film Festival say they are going to show the film, the two firends jump at the chance to go.

The film is laughed at by some young men and this sets Laura off on a quest to discover the truth about her father, the only child who survived a blockage in the air vents of the heating for the school where all the children and the teacher were killed. Laura’s Dad survived because his mother called him home at lunch time.

Slowly events are revealed and Laura realises that the true story is not really known but upsets the village by talking about it. Eventually she is told the truth but must decide whether to tell the world about it or to keep quiet. The book touches on many of Ireland’s past mistakes but also shines a light on one that is continuing today. There are laundrys, button factories, cover-ups, love and in the end honesty although I did think that the Church had a very low key role in the book which I suspect was not the case in life at the time. What continues today is the mass warehousing of people, refugees, in Ireland in the same way that the women who worked in the button factory were kept. Do we learn nothing from the past?

As Alderton says, the book was a page turner although I did think that Laura had a lot of things to contend with, creepy, abusive caravan park owners, local lads who hang her upside down over the sea, fire, equipment broken, blackmail and probably hardest to take of all, the knowledge that their film wasn’t any good.