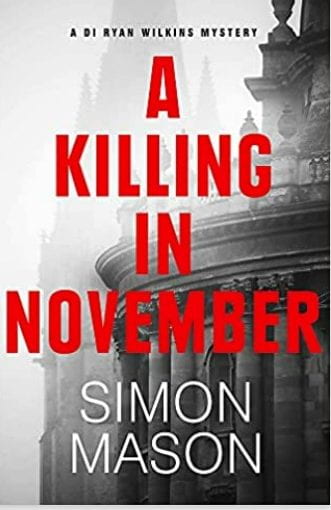 It is quite common to find detective duos where the pair complement each other or bring different skills to the job of detecting. Sometimes both characters are detectives and others, one is from a different sphere of work. In A Killing in November, both are detectives working for the same Oxford force but come from different social classes: one is black and Oxford educated, the other white and from a traveller comunity. Both are DI R. Wilkins although one is Ray and the other Ryan and this similar name causes the first problem in the story.

This is a campus crime story where the murder of a young woman takes place in the Provost’s lodge whilst there is a meal being held to try and gain money from a Saudi prince to build a new wing. Very relevant as many institutions are scrutinising more carefully where their donations come from. It is a twisty, turny story with several red herrings – students dressed all in black looking like they are about to kidnap the Sheik when they drop their trousers and moon for instance and there are back stories for the two detectives.

This book was quite a page turner and I read it in two sittings and would read more with this duo solving the crime in the City. It has just enough that is different to keep me interested to see what might happen next.