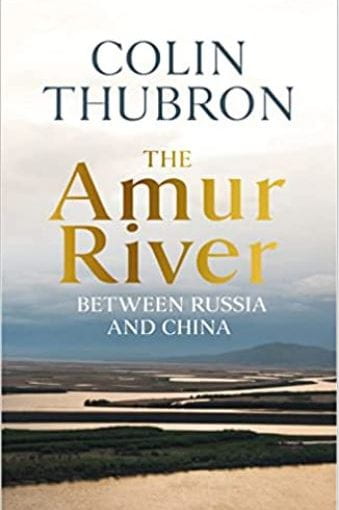 A river of about 2000 miles that divides Russia and China and a journey, half of it with fractured ribs and a broken ankle, that depicts the decay and depression on the Russian side and the expanding, money-creating Chinese on the other. And both distrust each other because of land grabs. Sound familiar?

This is not a journey anyone would take lightly but Thubron seems to take it all in his stride including the visits from the Russian police about why he is travelling and the characters that he meets along the way.

The river, however, is the biggest character in the book, slowly dropping in height, gaining width to over a mile wide and weaving in and out of China and Russia and providing a border for many, many miles. The book has a limpid feel that never quite gets going and, unlike the river, seems to be one-paced throughout. I can’t deny that I learnt a lot about this area of the world but overall found it quite depressing.

There seem to be an inordinate number of museums in all the small russian towns along the river where history has been glossed over, whether it be the Cossacks or Stalin or other massacres and then in China the bright and garish fake russian items such as rubbish bins made to look like matroyshka dolls or replicas of their churches all meant to signify the crossing of the river between the peoples but it doesn’t really happen in that way. The west thought they would be taking thier goods to the East to sell but of course it happens the other way around.

I thought it was just us that Russia had a problem with but it isn’t. It is China as well based on the old settlings of the borders and who has what land. Russia in the descendency and China in the ascendency so they are not going to take them on.