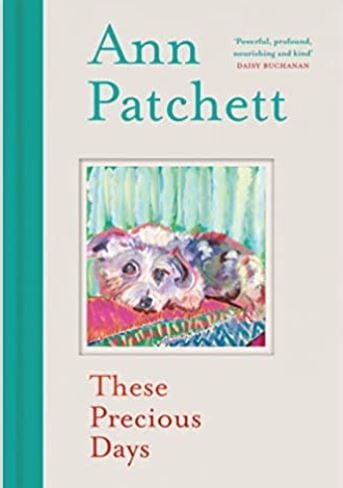 This is my choice for book club at the start of next month. I read it some time ago and loved it. Written during lockdown, it is a series of autobiographical essays which show what Patchett believes to be precious: friends, family, her bookshop, dog, reading and writing.

This is a gentle book, nothing too shouty or extreme but depths recorded smoothly with humour that makes you smile rather than laugh out loud.

There were several essays that I really enjoyed but I have decided that we will just discuss one or two that each of us liked the best or disliked. One of mine was the first essay My Three Fathers. Modern families nowadays often have more than one parent in them and if your mother has married three times then you will have three fathers, each bringing something different to the relationship. I loved this writing for the specialness that Patchett saw in each father and how much each of them had contributed to her life.

I also enjoyed the insight into a writer’s life and choosing a front cover in the essay entitled Cover Stories. I learned things like the fact that if a hardback sells well then the cover remains the same for the paperback but if it doesn’t, the cover is changed. (This book has the same cover for the paperback!) Patchett relates the trouble getting/finding a good cover for her books and often likes the ones that her publishers hate – why send them, you might ask. To show that they are trying and working really hard apparently!

That was when I realised that book covers were like birthday presents: How could someone give me what I wanted if I didn’t know what I wanted?

Once again, owning a bookshop helps because Patchett got to unbox and look at a lot of front covers and was able to decide what she did and didn’t like: literary fiction covers were mostly printed on matte paper, commercial fiction on glossy. There are trends including in the typeface and that covers are recycled when an author rejects them. The next couple of manuscripts that she finished, she also provided ideas for front covers. The front cover of The Dutch House was a commissioned painting (both hardback and paperback have the same cover),

I asked Noah if he could paint a picture of an imaginary ten-year-old girl with black hair and a red coat. The painting would have been done in 1950, but should be in the style of portraits of the 1920s. Oh, and the painter would have been Scottish, if that was helpful. . . . I told him I wanted Maeve’s gaze to be direct. . . . She would expect the world to look straight at her.

For the front cover of her next book that she was half way through she saw a painting of a bird , a pileated woodpecker, by her friend Sooki and realised it would be perfect. On a visit to her publisher she took along the picture of the bird and one of Sparky her dog also painted by her friend. When they were mocked up no one could decide which was best – they were both fantastic – and so she had a book with a double cover.

I would send my books into the world wearing the best suit of clothes I could find, because they were my books, and I knew that was how they’d be judged.

This links back to a discussion we had about our last book Lessons in Chemistry by Bonne Garmus who didn’t really like the cover but the marketing machine had taken over on what was a debut novel and so, Like Patchett with her early books, it wasn’t exactly what she wanted. Garmus wasn’t really sure that the book represented what she felt it was. Was it Chick-Lit? It looks a bit like it whilst there is nothing wrong with quotes on the front cover I couldn’t help thinking that the Nigella Lawson one, a sexy woman who is a cook, doesn’t really reflect Elizabeth Zott although she too was attractive and a home cook.

Reading Kate DiCamillo moved me because of the way Patchett describes what books can do for the reader.

That’s what I got from these books, the ability to walk through the door where everything I thought had been lost was in fact waiting for me. All of it. The trick was being brave enough to look. The books had given me that bravery, which is another way of saying the ability to believe.

As someone who read children’s books for a living, I have never read a DiCamillo book but have often read other authors talking about how fantastic her books are – and here we have another one! She comes to the books as a series of seeming random events but really falls into them when quite ill, lying in bed. There is often a belief that children’s literature has nothing for adults and yet for me I have often found that it illuminated adult fiction and allowed me to understand the bare bones of a story or what it was saying.

But a story is in the telling, and these stories are expertly told.

And just like a child who finds her own dog named the same as the dog in the book by DiCamillo, Patchett felt the author was speaking directly to her as she remembered her dog, her father, her friend Lucy and her grandmother who all surrounded her with love.

I stood inside my gratitude and cried until I fell asleep.

I am looking forward to the discussion.