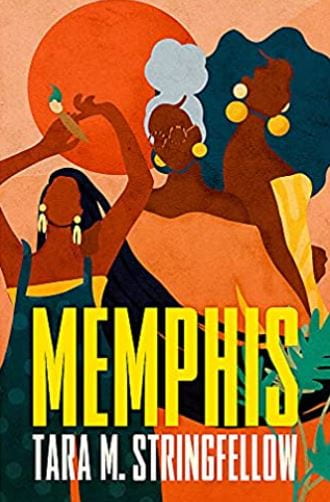 One of life’s great pleasures is to walk into the library and be faced with a shelf of new books, several deep just waiting to be borrowed. And this book was one of them. When I tried to borrow it, the machine wouldn’t let me because the book was in demand – someone had it reserved but the librarians are fantastic and booked it out to me although it couldn’t be renewed. I read it the next day!

In many ways it isn’t a new story. Black women abused by Black men in their own household. Ambitions and desires thwarted by life events. Women who are strong and cope – more than cope – and then an understanding of why things are the way they are slowly develops. This old story, however, does not detract from the brilliance of the book which is a debut novel for Stringfellow and all the more fantastic for that. The book spans about 70 years and three generations of women and shows how times change through what happened to their men. Miriam and August’s father was the first Black policeman in the district and was lynched by the police he worked with. Derek, August’s son became involved in the gangs in the neighbourhood and ended up in prison for life. In the middle, Miriam’s husband ended up as an Officer in the military and worked in the Pentagon but was damaged by war.

It is the story of sisters coming back to live together, their lives having dealt them hard blows, literally in Miriam’s case. Back in Memphis with their children they set about living their lives and finding joy where they can. One place is in August’s salon at the back of the house where women meet to get their hair done and to talk. And, it is from this community that support is offered through food left on doorsteps, children watched and wise words shared.

The elephant in the room throughout the whole book is the rape of Miriam’s daughter at the age of 3 by her sister’s son, Derek. It is not that it is ignored because it is mentioned often, but the impact it has on everyone and how it affects their lives is tremendous right down to the very end where it is revealed what Derek must endure in prison.

I enjoyed watching Joanie throughout the book and the detail about what it takes to become an artist in any field, although hers is drawing and painting. It flows through the book, always present when Joanie is and gently shows the focus and passion required to follow a creative line. A theme in the book is what is passed down from mothers to children and this wends its way down to Joanie who might be the only one able to follow her desires from the start.

The book moves forwards and backwards in time with the different voices, only Joanie’s told in first person but not really from a child’s point of view but as if the child were a grown up.

The acknowledgement at the end of the book is pages long but it is the last two that are really very sad. That a Black woman can’t sit in a cafe on her own and write in this day and age is appalling. I commend Stringfellow for listing the places that would allow her to.

. . . but alas, my country has a long way to go in learning how to treat Black women little better than dogs.

And, as a teacher myself, I couldn’t agree more with her last couple of sentences.

Perhaps that should be my strapline for this blog!