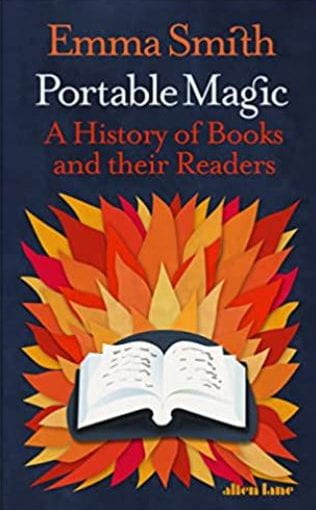 I absolutely loved this book – I have a penchant for books about books and I love books so it was probably a given that I would. This is an incredible dive into the history of books and to some smaller degree but not page by page, more of a jumping in and out of important times in book history not just looking at new book technologies but also looking at the reader. When talking about teaching children to read, we used to say that a reader is a combination of two things – decoding the words and making sense of the words when strung together and you are not a reader if you are missing one of those two elements. Well, in this book Smith defines a book when it is:

. . . in the hands of it readers. It is an interactive object. A book that is not handled and read is not really a book at all.

It is a book about the form and content of a book and how the two come together to create what we read. I particularly enjoyed reading about American servicemen being given small, pocket-sized copies of books to take into the second world war to read. There were more than 1,300 titles where books were used as weapons

And it was these that started the mass publication of books which we can now find in railway stations and airports. Paperbacks were the ‘babyboomers’ of the book world and the American Service Editions of books had a significant impact on the publishing industry.

I also enjoyed reading about how book tokens came about. In the early 1800s people started to give each other books at Christmas time that were about recognising friendship. They contained snippets of poetry, images of flowers, were mostly aimed at women and established horizontal networks of friendship rather than top down, vertical networks of patronage. But of course, in time, anxiety arose. Am I giving my friend a book they will enjoy? And so started coupons or, as we used to know them, book tokens where the reader could choose their own book. Of course, we have gone further than this now and give plastic type debit cards with money on them to be spent in specific shops.

I was fascinated by the idea that shelfies are ancient and were present in paintings before we could all take our own pictures with our phones – although it is still true that the books we have on our shelves say something about us. Think of all those Zoom calls made with shelves as a backdrop. We’ve probably all seen politicians on TV over the last couple of years with their own books facing out on the shelves behind them as if they were in a bookshop.

When we were given a curriculum for reading, I can remember the discussions we had with each other and teachers about what a classic is particularly in light of the age range of the children we taught, 5 – 11 years old. We used to define it as a book that had stood the test of time, a simple definition that allowed teachers to choose what they wanted. The Hungry Caterpillar by Eric Carle was written in June 1969 and so fits the definition easily. It became a little more difficult when we were asked to define a ‘modern classic’. When is the cut-off date? So, I was very taken with Italo Calvino’s 14 definitions of a classic mentioned in the book who never mentions time. Like Smith, No.6 appealed – a work that hasn’t exhausted all it has to say to its readers – and I can think of several books that, for me, fall into this category.

I wondered who had the sort of knowledge to write this book and of course, it is a professor of Shakespeare Studies. Smith has also written ‘This is Shakespeare’ a Sunday Times bestseller and I think I might like to read that one now.