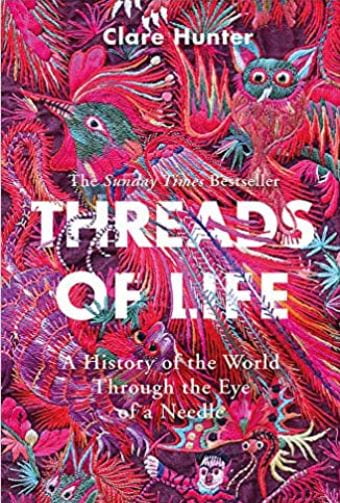 This is a wonderful book for a sewist like me who also does a bit of embroidery every now and then. Hunter has looked at events in history and how women have recorded them in sewing as a way of coping with loss, depression, trauma and just the need to say how it was for them.

The book starts with The Bayeaux Tapestry but what spurred Hunter in to action was the fact that walking through the exhibition, the women who created the masterpiece were never mentioned – at all! This was 2013 and I don’t know if things have changed now but it speaks to this idea that it is women’s work and therefore not worthy of comment. Domestic if you want to be really insulting.

There were many moving examples of sewing being used by people who would never probably call themselves activists but who are. There were the mothers whose sons had been disappeared by Pinochet who wore white scarves on their heads representing a nappy and then embroidered their son’s name and date of birth on them in red. There were the quilts pieced together from tiny scraps of material because the people lived in abject poverty and didn’t have spare material lying around.

The example that really resonated with me were the curtains created by men with severe mental illness in hospital. The fabric and the choosing of colours and patterns to create on the curtains brought a slight softening of face and relaxing of body for a short time whilst they were working and creating.

The book was well-written and easy to read although I really would have liked photos of some of the pieces of work discussed.