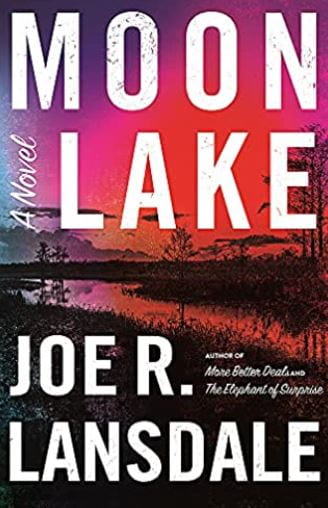 One of the ways we used to help children to write was to show them how to boil stories down to their most basic plots, there is a theory that there are only seven basic stories, and then use that framework to pad out and create their own story. As I was reading this book I had started to boil it down

This is the basic structure of many a story – James Bond being one in particular – and could be called a quest as in a quest for the truth with of course many obstacles to overcome and this is what this book is.

I found the first part of the story much more interesting than the second half. A young boy is rescued from a lake where a father tries to kill them both by driving off a bridge into Moon Lake. The boy then has to live with the family until a relative can be found which takes several months. The added difficulty is that the boy is white and the family black and that this is the 50s and 60s in Texas in a town where the two do not mix. I didn’t feel that this element of the book was developed as much as it could have been and it does just peter out at the end. I also thought we got the male perspective of this black and white but not the female perspective and she was one half of the relationship.

The second half of the book was much more predictable and I had worked out the ending well before we got there so there wasn’t really the element of surprise or even real fear. I did however, enjoy the book and read it over a period of 24 hours. It just wasn’t thought provoking although it had the elements to be so.