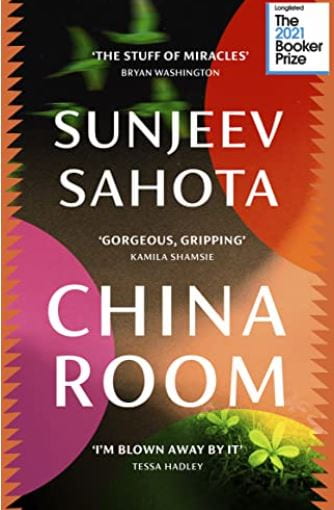 China Room is a story set in India in 1929 and the present day with the two stories woven together by family ties.

In 1929 three brothers have three wives who never actually know which brother is their husband and this leads to complications. The three women live on the farm, work all day long and at night live and sleep in a small room with two beds. The brothers request their wife and take them to a separate room at night but because they are not sure who is with whom, mistakes are made and two who are not husband and wife fall in love and try to escape. It is almost Shakesperian in terms of its muddle although things do not unravel and become alright in the end in the way it does in A Midsummer Night’s Dream. Whilst the ‘sisters’ all get on, eventually jealousy leads to the story changing tack.

In the present day, 1999, Mehar is 18 and addicted to heroin so his family suggest time in the Punjab before he goes to university. He travels out there and has withdrawal symptoms that incapacitate him and eventually lead to him leaving the house to go and live on the old, abandoned family farm. As his symptoms subside, he starts to venture out into the world again and to build relationships with others.

Both stories are about being imprisoned and escape although they are not really drawn together until the very end of the novel and so you as a reader have to make the connections. It is also a book about love – the freedom to choose who you love and eventually marry, or in the case of his Aunt, the marriage she was imprisoned in because she was not free to choose.

At the end of the book is a picture of probably a great grandmother holding a tiny baby which lends a feel of autobiography to the story and Sahota does say that the book was inspired by his family history – was that the drug addiction or the locking up of his great grandmother by her mother-in-law?

This book has appeared on several longlists for book awards and I can see why.