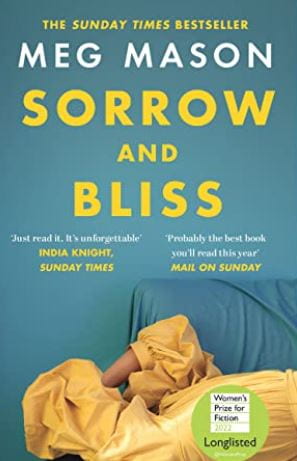 This book had the feel of the film The Full Monty for me. The first time I watched it I thought it was funny, every other time I have seen it I think it is one of the most depressing films I have ever seen, along with Billy Elliot. In Sorrow and Bliss the wit enables you to skate over the really dark and seemingly never ending mental illness and its behaviours which drive this book.

Martha, who has lived with a devastating mental illness off and on for most of her 23 years of adult life, looks back and tries to understand what has happened to her life and to herself. This includes her life with Patrick her husband who has been there like a ‘comfy sofa’ forever.

Slowly, the story reveals the ups and downs of the illness like a ‘string of beads’ threaded together rather than individual episodes.

As a young woman Martha was told it would not be safe for her to be pregnant and be on the medication she was taking so she convinces everyone that she didn’t want children – including herself. Eventually she meets a doctor who names her illness and provides the right kind of medication and assures her that everything she has taken was perfectly safe to take when pregnant. The illness is never named in the book, just referred to as ___ ____ because the book isn’t really about which illness but about the effects of years of misdiagnosis, advice and not knowing herself. (I have to admit to really wanting to know what the illness was although Mason says at the end it is not a real one!)

As Martha comes to terms with her illness and starts to talk to those close to her about it, it turns out that there is a history of it within both sides of her family and that her mother has known she has it right from the start but said nothing. I find this almost unforgivable – to watch your child go through all the traumas she did and not speak up. I understand not wanting to label anyone but sometimes labeling means correct medication and a path to wellness.

The book ends on a note of hope and the realisation that she has always been surrounded by those who love her and have loved her throughout – just like Patrick.

I get the sorrow in the book but the bliss is a bit harder to find. It is there at the very end but it’s only a promise.