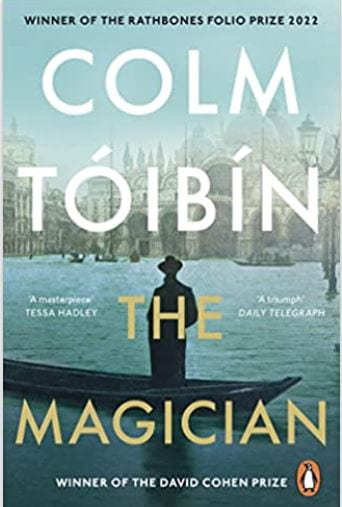 What do you call a book that is based on a real person and the facts of their life but is fictionalised, like The Fortune Men and The Magician? Is it faction, ficts or a bionov?

The Magician is a biography of Thomas Mann who wrote Buddenbrooks, the only one of his books I have read, but is used as the underlining construction for a novel. Mann, it turns out, was a man who seemed to be stuck in a time where the rest of the world moved on but he didn’t. He came from Lubeck and moved to Munich, marrying Katia, the daughter of a rich business man. Theirs was a marriage of tolerance as threaded through the story is repressed homosexuality of a man who had 6 children with his wife. (Well the books says his day dreams were homosexual and they were but the man might have been bisexual.) Theirs was a life of money, family who were Jewish but denied it and a famous writer – in fact his brother and son were also writers of note.

He escaped the wars and constantly found himself in difficult situations trying not to irritate the Nazis but being opposed to them – never knowing when to speak out or when to stay quiet.

I have to admit to giving up halfway through the book – although written like a saga I found it rather flat and if I’m honest a bit boring. I couldn’t see why it was called The Magician – yes, Mann did some magic tricks for his children but there wasn’t anything else. It was probably made clear in the second half of the book. It was the winner of The Rathbones Folio prize and on the shortlist for the 2021 Booker prize. This makes me think I have somewhat missed the point with this book.