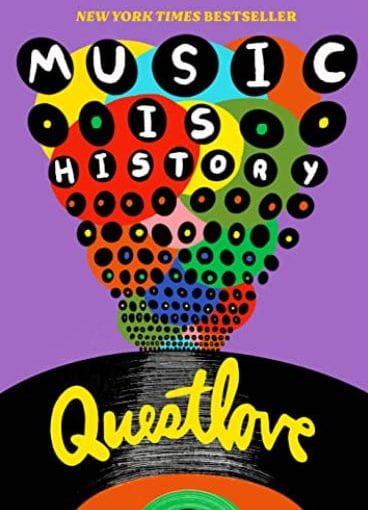 I logged into Libby which is linked to our library to look for some books and on the front page was their Big Library Read world digital book club offer: Music is History by Questlove. Anyone can get hold of it and read it from the 4th to the 18th of April. And what a book it is. I haven’t ever read anything quite like it before. The book is organised into chronological chapters from 1971 to 2002, a year per chapter and each chapter focuses on a song that is evocative of that time for the author with some detail around it. There are lists of other songs that relate to the chapter or idea being talked about – I love a list – and it is all round fascinating. It is definitely a work of passion and deep, deep knowledge about music.

As a review, I thought I would magpie the structure of each chapter and write my own version for April 2022.

There’s an old saying – Good artists copy: great artists steal – I don’t know how accurate it is or even if Picasso ever said it but often there is some general truth in this sort of statement which is why these sorts of quotes become every day speech. They also become truisms.

As a sewer, or sewist as we like to be called because sewer can be mispronounced, we glory in what we call pattern hacking. That is, we take a pattern and play around with it, changing it and making it into something else. We then love to take pictures and share on Instagram in particular but any social media will do. We are shameless in the changes we make and sometimes the garment made bears little resemblance to the original one. In fact pattern developers will blog about the hacks that sewists create. We celebrate it.

One of the most hacked patterns is the Ogden Cami. In the pictures below are four hacks – see the makers here. The original is the fourth picture.

All are still recognisable as having started with the Ogden cami but have gone off in different directions dependent on their owner’s style and preferences.

So, where else do we allow, if not praise, copying? Well, I am a teacher and there is a current school of thought about teaching writing that we should have what we call ‘Texts that Teach’ or Americans call ‘Mentor Texts’. That is texts that allow children to an insight into ways of writing and provide a scaffold or support for the child to have a go of their own. They often have great use of language, a clear structure and something worth talking about. (In fact I am using the book Music as History as a Text that Teaches and copying its structure here.) It is based on an apprenticeship model where when the children lack confidence or have never written anything like this, they copy the model closely but as they become more confident they start to move away from it and develop their own version. In fact, is this not what sewists do? Someone new to sewing will make the pattern exactly as is and those who are confident sewists will say “The straps are too narrow to hide my bra so I will make them wider”.

Neither of these situations involve other parties selling, and making a fortune, based on other people’s patterns or writing although this situation does occur. But in music this seems to be happening more and more.

Using our time machine, lets jump back to 1911 when the Copyright Act came into force. Sound recordings were protected and the composer had the right to control reproductions. This was then amended in 1956 and 1988 as ideas developed as did technology. With digitisation things really moved on a piece. John Perry Barlow, a former writer for The Grateful Dead said that intellectual property law

“cannot be patched, retrofitted, or expanded to contain digitized expression”.

One of the most expensive copyright infringements in the music business was Robin Thicke and Pharrell Williams’ payment to the Marvin Gaye estate of $7 million for their song Blurred Lines and its similarity to Got to Give it Up (1977). As an aside, the song is dubious whether it contravenes copyright laws or not. The blurred lines are about consent and although the tune is catchy it is not a song for our times, or any time.

Williams and Thicke said their song was inspired by Gaye but didn’t copy him. That’s a tightrope. And one you can never be quite sure which side you will fall on. This month, Ed Sheeran ended up on the winning side of the rope because Sami Chokri and his lawyers couldn’t prove that Sheeeran or his co-writers had listened to his song. That’s a very high bar of proof to jump but one that may stop those who want to sue just to make money out of it.

So, in this month when there is a global pandemic and a war in Europe, a very rich man wins even more money because it is about the principle of the matter according to him. Meanwhile, developing child writers go on copying their heroes and sewists continue to hack their patterns and share with pride.

Judge for yourself how similar these refrains are.

Other songs which went to court.

There was more than one trial for this case. The first time the court tried Led Zeppelin the jury were not played both tracks but had to work out their judgment based on reading the sheet music. Hmmm! Perhaps listening is easier and in truth what the cases were based on.

Settled out of court with Tom Petty credited on Smith’s track. What do you think?

Again, settled out of court with Coldplay paying and Satriani dropping the case. This meant that Coldplay were not accused of anything. What do you think?

If you are interested, the next digital global book club will be held in July and all the previous books can be seen here as this book club has been going since 2013. I haven’t read any of them!