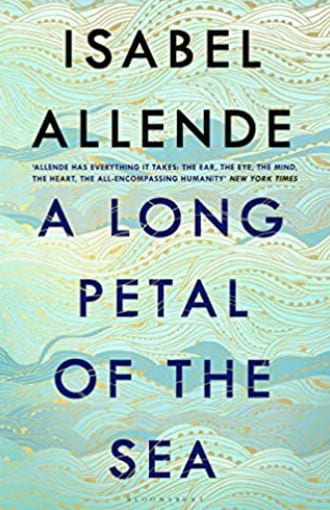 Sometimes, timing is everything when reading a book. I saved A Long Petal of the Sea to read in the week before I needed surgery but when the questions that came through to discuss arrived, I realised that I had taken nothing about the book in. 12 days after surgery, I devoured the book and absolutely loved it.

This is the story of Victor and Roser, brought together by the Spanish civil war and who eventually decide to leave the country even though Roser is heavily pregnant with Victor’s brother’s baby. They flee to France, who are not welcoming, but eventually through Pablo Neruda end up on the Winnipeg and travel to Chile. Once in Chile they settle but again have to leave the country ending up in Venuzuela. This time, however, they do end up going back home to Chile and living out the rest of their lives.

I thought what I would do is answer the questions we were given to discuss as I was not able to attend the book club due to isolating before more treatment.

What was your overall response to the novel? How did the mixture of the family sagas and historical events work for you?

I love family sagas and historical fiction so the two together are a winner for me. I particularly liked the fact that this isn’t a period of history that I am familiar with although I have read several books that are based around the civil war such as Wintertime in Madrid by CJ Sansom and A Moment of War by Laurie Lee which is the last in an autobiographical trilogy that starts with Cider with Rose.

In sagas I like the fact that you don’t get too bogged down in details and emotions; the point is the overview, the length of time that the story spans and the patterns in life this produces.

What were your first impressions of Victor Dalmau and Roser Bruguera? Did your impressions shift as the characters themselves changed throughout the course of the novel?

I stayed fairly constant in my love of both of these characters. It was obvious that Roser was going to be a survivor, how many starving shepherdesses become concert pianists amongst many other things and Victor was the slightly more idealistic, reflective one but who through his work as a doctor in war times was a hardened man. I don’t think the characters changed so much as expanded over time. What did change was their feelings for each other which went from carrying out a duty of care to a love that sustained them through the many difficult times that they had.

Victor discovered how sensual Roser was in her fifties possibly due to security in her life, child bearing years over and success in her chosen work of piano playing and developing an orchestra. When they moved to Venezuela, Victor relaxed and spent leisure hours learning to tango and playing chess instead of working every hour that he could. Both of these developments were the luxury of a secure relationship.

We eventually learn that Carme abandons Roser and Aitor Ibarra so that she would not be a burden to them. How might things have turned out differently if she hadn’t left?

I found that to be quite a shocking part in a book but no parent wants to be a burden on their children and this was an example where it was taken to the extreme. If she had stayed she may not have survived the hardships Roser had to endure, there might have been a lot of upset and longing for her home country which would have made it harder to get through. As it was, the decision about whether she lived or died was taken out of her hands to some extent by being rescued by a couple that she then stayed with before moving to Chile to be with Roser and Victor.

What do you think of Ofelia’s storyline? How did you feel about her decision to keep the baby and her family’s deception in telling her it died during childbirth?

I didn’t like Ofelia much when young or old. She was the sister of Felipe who housed Roser and Victor when they arrived in Spain. Victor and Ofelia fell in love, Ofelia became pregnant but had to leave the house and go somewhere where she was not known for the duration of the pregnancy and then into a convent for the birth. She was tricked by a priest (bloody catholic church again) and told her child had died soon after birth but in reality was adopted by another couple. It seems quite shocking but this was the late thirties, early forties and these things happened. In a way she had led a protected life and it was probably Victor’s responsibility to prevent pregnancy, he was a doctor, and to protect Ofelia more from the damage that this relationship was always going to cause. It was a cruel practise upheld by the church and all about how things ‘looked’ and the damage it might cause to a families reputation.

I thought this story line was in interesting contrast to the long, slowly developed love that Roser and Victor had and a comment on the love/lust type of relationship that this was with Ofelia and which did not survive the obstacles of family and respectability.

How did you feel about the ending of the book? Was it what you expected? If not, how would you have ended it?

I knew at the end that Ofelia’s daughter would come and find Victor – it was set up to do that. I expected one of them to have died because that reflection on mortality is what causes us to think back over our lives. The only thing that seemed a bit fantastical was the ease which with Marcel, Roser’s son, accepted that he had a half-sibling in one phone call. I suppose the thing about sagas is that you can’t go into every emotion in detail. There just isn’t the space.

There are various themes that run throughout the book, e.g. survival, exile and belonging, displacement, resilience and love, politics, and religion. How well did you feel that Isabel Allende tackled these issues within this novel?

The book details well what it means to be a refugee and also what it means to be given refuge by a country that does not lock you up in what was effectively a prison camp where thousands of people died. It also shows the loyalty and benefits that refugees can bring to a country where they are wanted and allowed to settle and work using the skills they have. What made this easier is the fact that Neruda chose all these people to be on the ship and so whilst there were a variety of skills represented so were there people with ideas. This wasn’t a ship full of people who were economic migrants. I think that is much harder to deal with successfully and the book does detail the political difficulties in getting a ship of 2500 people into the country. Imagine Poland and other nearby countries who have willingly taken in millions of women and children escaping from Ukraine and the contrast with the UK government who have put up so many barriers that people who are escaping war can’t get in. All you can do is hope that we as a country never need anyone’s help in this way.

I am not familiar with Pablo Neruda’s poetry, are you? How did you feel it worked to start each chapter with a quote from his work – and for him also to be a character in the book?

I am familiar with bits of Neruda’s poetry because it is often quoted in books. Each of the chapters in this book started with a snippet of his poetry and as the book says, he was a larger than life character and inhabited this story in that way, including the writing. I understand that quite a bit of Neruda’s poetry is about love and so is this book.

I have given this book 4.5 rather than 5 stars probably because of my problems with the first reading I did of it. That is my problem rather than the book’s but hey, ho. An excellent book club choice.