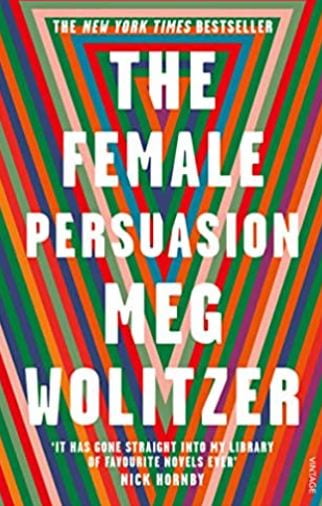 This is one of those books I picked up in the library because it had an arresting front cover and I was looking for things to read. And, I must say, I am not really sure what this book is trying to say.

It is about what I would call old school feminism or what focused on women’s rights – there is nothing wrong with that – they still need to be focused on but told through the eyes of white, middle class women. So, I suppose it does beg the question – what is feminism?

It is about feminism as a sisterhood where women have mentors who push and discuss at just the right moment to launch someone else into the stratosphere. In this book it is Faith who mentors Greer (this is a first name in this book but it must be significant) who comes to work for her. At the end of the book the baton is passed from Faith to Greer only for Greer to take off in a different way.

It is a book about power. The power of Faith over and with women but also the power of men to finance women’s endeavours and then not really pay any attention in meetings when they are spoken about. It is also about the corrupting influence of power and here money seems to trump everything else.

It is about not setting a determined path to the things you want because life gets lifey and it doesn’t always work out. In the case of this book, there is a happy romantic ending for Greer but she has their life so mapped out it is not surprising that the map isn’t followed. It’s a harder route.

It is about female betrayal – best friends in some cases although it doesn’t seem to affect the characters too much. They feel bad but that is all.

It is about a man whose parents do everything for him and then his cleaner does everything for him until his mother can not cope and he has to take over her cleaning job and ends up taking responsibility for cooking and cleaning at home. I did think this was a bit cliched because it was so absolute a turnaround but may be it does happen.

But ultimately, I am not sure what the main message is.

The book is well-written and I did read it in one sitting. I also liked the structure where the story was told from one point of view but parts were not totally clear. It was then picked up by another character’s point of view which explained a little more and took the story further on. That was clever. I call that sort of structure the ‘overlapping paper’ structure as it reminds me of a series of post-it notes stuck down overlapping each other.

I think the book might be a bit of a marmite book.