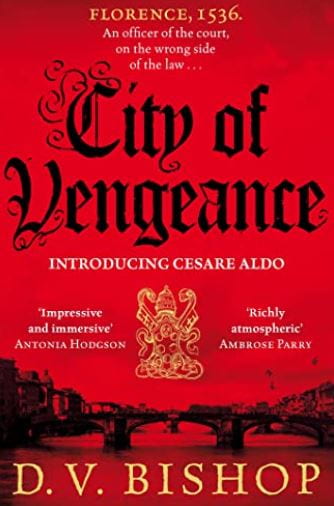 I love a good detective series. Throughout the lockdowns I reread in order all of Donna Leon’s books, all of Louise Penny’s, all of C. J. Sansome’s and finally all of James Lee Burke’s Dave Robicheaux books so it was nice to meet another that might be the start of a series. As the title says: City of Vengeance: Introducing Cesare Aldo.

This book is set in Florence during the Medici times where people are being killed. First it is a courtesan that turns out to be a man in women’s clothing (I don’t think they used the word trans in the 16th Century), then it was a Jewish money lender that Aldo had been asked to guard on a journey, the assassination of the Duke who ruled over Florence and finally it was one of the law officers that worked in the same place as Aldo. During all of these deaths, Aldo was beaten up several times, thrown into prison and beaten up again and finally blackmailed because he was gay.

Despite all of this, it felt like a ‘safe’ read if you like historical detective books. It wasn’t too complex and it didn’t require too much thinking which sounds awful but was just what I was looking for. There probably won’t be another Shardlake after Tombland as C. J. Sansome is ill and so I wanted something that might do instead. This isn’t quite as good but I will read the next one: The Darkest Sin which says it is a locked-room thriller. I’ve just read one of those.