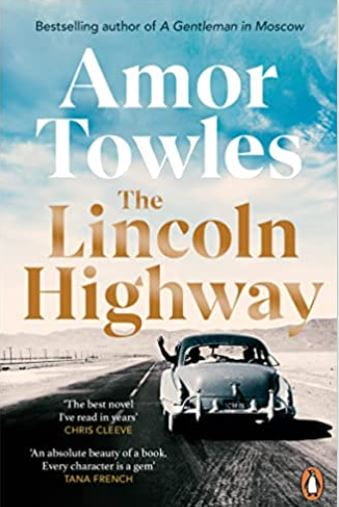 I loved A Gentleman in Moscow and I loved The Lincoln Highway just as much, if not a little bit more.

This book follows in that great tradition of an American road trip, a quest that leads to transformation of some sort. On this trip are four characters all from Salina, a young offenders institute or what is called in America a ‘Juvenile Work Farm’. There is Emmett an 18 year old who is released early because his father has died and who comes home to find that he needs to sell the house and farm to cover his father’s debts. There is Duchess, a young man who can be charming and charismatic but who uses his time to redress injustices done to him and by him with fatal consequences, and Woolly, a young man from a well-to-do family who has never seemed quite right. And finally, there is Billy, Emmett’s young brother who Emmett has gone home to collect.

The road trip is not straight forward and always seems to be going in the wrong direction in every way. We hear about the events of the characters and the people they meet. Each person has their own voice and tells their story from their point of view, often leaving the story incomplete, only for it to come back round and be retold by another character and to make more sense.

Running through the whole story is Billy’s book of heroes from A to Z and how Billy has read it 25 times and uses it throughout the journey to offer solace to characters, to provide principles to live by and to create his own story under Y for You. In fact the whole book is about stories as each chapter, counting down from ten to one, is a story in itself and many other stories are referenced in it. This really comes to a head when the author of Billy’s book talks about the shape of stories being a diamond on its side and what the author has to do is decide where to start telling it. It is about the power of story used to make sense of the world.

There is also the idea of dreams and expectations, paying back debts and the kindness and decency of ordinary people. There are cars – it wouldn’t be a road trip without cars – and at the heart of it all is money. Money driving what people do – greed, which makes the ending particularly fitting.

As in all great duos, Batman and Robin, Wonder Woman and Wonder Girl, it is the sidekick who comes to the rescue at the end and Billy follows in that great tradition.

This book would make a fantastic book club book because there is so much to discuss – there were plenty of things I wasn’t expecting and although it quite a long book, it rolls along at a clip alongside the adventures.