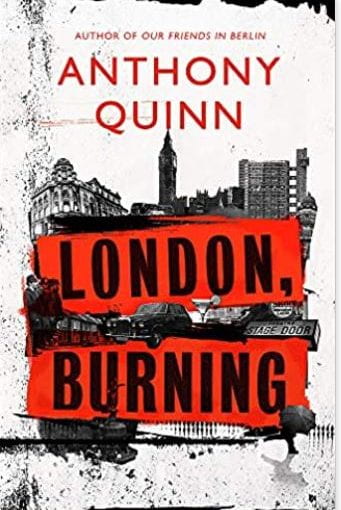 That was just what I needed to read. A shorter book, a thriller which would be my most favourite genre of all, and well written.

London, Burning is set in London during the 70s in the lead up to the election that Thatcher won. All around there are strikes, particularly by the bin men, with protests and Neo Nazis on the streets. There is a background of music from the Clash but also Joni Mitchell, Luther Vandross and Donna Summer.

There are four main characters who all start off with separate back stories but eventually come together to create the ‘thriller’ part of the story. There is DC Vicky Tress – new to the detective team – but aware of the corruption and recycling of drugs and money going on. Hannah Shore is a journalist who writes articles for a news paper, Callum Conlan accused of being in the IRA and killing an MP and finally Freddie Selves the director of National Music Hall and a larger than life character. Each gets an introductory chapter to themselves and then the plot inches towards the explosive climax and the coming together of the characters.

I have done what I usually do and jumped in at the last written book in a series so will go back and read all the previous ones. Each book is set in London but during a different time period – Victorian times, WW1, the blitz, the 50s and 60s so I wonder if the next book will be set in the 80s.