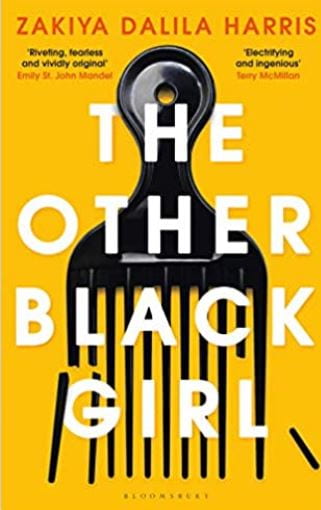 Wow – The Other Black Girl (OBG) is a stunning debut which is a little bit suspense, quite a lot horror and a little bit sci-fi making a leap-along story. It is set in the world of publishing, something Harris knows a lot about, where the protagonist Nella is the only black person. The story shows us the everyday racism, microaggression and tokenism that takes place and leads us to the antagonist Hazel-May who also gets a job at the publishers. Now there are two black girls and the expectation from everyone, including Nella, is that they will be friends and get along together. Both are ambitious with Nella working hard but speaking up and trying to change things and Hazel taking a different route to success. And then there are the hair products, an essential part of the story and of Black hair

There is just so much in this book – codeswitching, how black you are, the colour of your partner, whether you grew up in a black or white community, subculture, the response of white people towards you, how natural your hair is, how you make yourself seen at work and how you respond to all of this. The book is a real spotlight into a work space where diversity is seen as something that has to be done rather than welcomed for its own sake.

The book is structured day to day almost like a diary which has the effect of creating a build-up and showing how quickly things can get out of control. These daily recordings are interspersed with chapters of other black women who have been in the same position that Nella finds herself in and are clues to what is going to happen to her.

This is also a story about gaslighting (not a word I use that often) where someone is manipulated into doing or being something by making them doubt their own sanity, not knowing what to believe or what is the right decision to take and this is where Nella finds herself. And its even worse when it is one of your ‘own’ doing it – isn’t it?

This book will probably be my next choice for book club as there is so much to discuss. Here are the questions I would like to talk about –

How is systematic racism seen in Nella’s work place?

Why didn’t the diversity sessions work?

What is the role of hair grease in this story?

Is there an element of passing in this story?

What was Richard’s role in the story?

How did the structure support the story-telling?