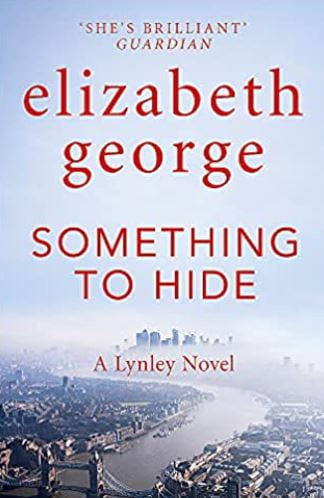 What is it about long books at the moment? Something to Hide is 622 pages long – although to be fair, George’s books are often long.

I was so excited to pick this book up. I have long been a fan of Elizabeth George and there it was, sitting on the New Books shelf in the library so I had to have it even though I have a fairly big TBR pile. The sad thing was, I didn’t really enjoy it.

There are of course several stories involved in the book, as usual, with the theme of Female Genital Mutilation (FGM) as the central force. The first story about an 8 year old girl being prepared for this took 120 pages and only after this did we meet Inspector Lynley and his usual team. The second story was the death/murder of a policewoman who worked on the Anti-FGM team for the Met and as usual there was Lynley and his love life as well as Barbara’s non-existent love life. Also included is Deborah’s involvement, in fact there are all the usual things that we have come to expect from George. There is of course a lot more to the story than this – pages of it – but I couldn’t help feeling that I was being lectured at a little bit.

This meant that I started to jump over bits of the story that were not about the police which was a shame because the topic is an important one, and one that we know goes on in the UK. The thing is the story was told with the reader having to do very little in between the lines. I can remember a friend of mine saying how Shakespearean she thought the book she read was, particularly in terms of themes and whilst this one had loss, jealousy, escape and exploration about what the ‘right thing’ to do is in FGM cases, for me it wasn’t Shakespearean with that time-defying, enduring quality.

I am not sure if I have changed or George has changed but this one did not work for me.