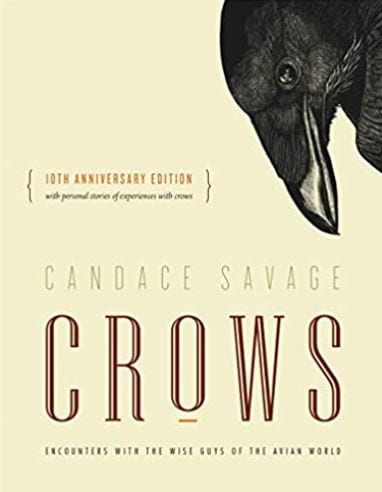 This book is February’s book of the month for the Nature Literature Group which I have joined to dip into when there is a book that appeals.

Crows is a slender volume of work which intersperses scientific information about the family of Corvids, crows, rooks and ravens, with stories from mythology, prints, photos and poetry.

Like most people, I know some things about crows such as the fact that they use tools but through this book I also learned about the way they live in groups, their interactions with humans and their intelligence.

The book illustrates the symbolism of crows and ravens in mythology with a range of stories. They are often seen as harbingers of doom or messengers from God. Celtic mythology has Morrighan who sometimes appears as a crow, Native Americans see the raven as a trickster and Odin from the Norse myths is often represented as a crow.

My favourite story was from Aesop’s fable, The Crow and the Pitcher where a thirsty crow found a pitcher with a little water in it that she couldn’t reach it. What did she do? She dropped stones into the pitcher until the water was high enough for her to drink. Later on in the book, a scientist observes ravens gaining a piece of salami hanging from a string under the bird table. The ravens pulled the string up on to the table to get to the salami and didn’t try to fly away with it as if they knew they couldn’t because of the string. Very clever birds.

Crows operate in groups and also have co-operative breeding which is a new behaviour to me. Some of the birds act as helpers, often the young siblings who are not old enough to establish their own group, and will aid the feeding of the new chicks. The crows seem able to take flights away from their family and suss out the other surrounding groups ready for when they do leave.

I enjoyed this book, it isn’t something I would have normally picked up and read, particularly the range of texts included.