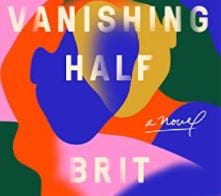 This is my choice of book for our book club meeting in December. I read it a few months ago but I have to admit that some of the themes in it have haunted me since.

It is the story of identical twin sisters, black but living in a fictional town called Mallard where everyone has lighter-coloured skin thanks to slave owners, who eventually run away and lead quite different lives. And this is where the book gets down to the nitty gritty. Not just different lives but different communities, different families and different racial groups; Desiree remains in the black community but Stella passes as white and lives and works in the white community.

The girls are totally inseparable when younger but although they may be identical twins, they are not identical when it comes to character. Desiree is headstrong and spirited and Stella is bookish and biddable. Desiree loves acting, feels like herself and not one of a pair, rushes around doing things last minute and often gave the wrong name for fun. Stella liked to disappear into the background, ironed all her clothes for a week in advance, never wanted to switch places and was prone to nightmares which is why Desiree was so surprised when Stella upped and left in the middle of the night to set up her own life.

The first big tension in the book for me was how on earth do you pass for white? And then, will the secret be revealed?

All there was to being white was acting like you were.

The title The Vanishing Half is obvious with the twins losing each other if you consider one set of twins as a whole rather than two separate individuals. However, whenever you are being someone else, you often lose more than just the elements you want to lose. Stella lost her past and her family and suffered with a depression and grief that she found hard to explain. So my next question is, who else in the book had a vanishing half?

At one point in the story, a black family move onto the street where Stella and her husband are living. Stella’s reaction to this is charged and she responds by trying to be friendly and then rejecting the family. I wondered what drove Stella to behave in this way?

The book is an epic in that it covers a large timescale from the 1950s to the 1990s which allows us to follow Stella and Desiree’s daughters. There is a lot to explore in their lives and how they become the people they do allowing us to explore further how identity is shaped.

This is a book of shape-shifting, chameleon-like characters so what is Bennett saying about identity?

And finally, why didn’t this book win the Women’s Prize for Fiction 2021?

What did you think of the book?