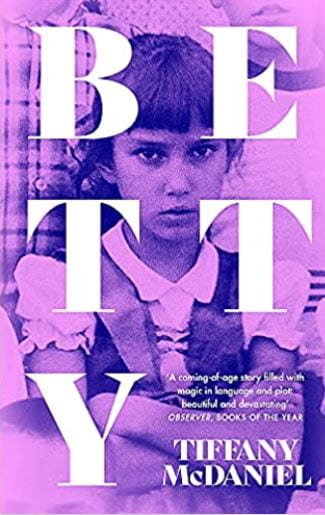 Wow! What a book; a coming of age story in a family with secrets. It’s a story of racism, abuse and loss but ultimately it is about the survival of Betty and how she refuses to allow the same things to happen to herself. I loved her voice and I loved Betty.

Betty’s mother, Alka, and father, Landon, meet in a cemetery where he is collecting mushrooms and she is sitting eating an apple. I knew right at the start that this was going to be about a book about the boundaries between men and women when Alka noticed that Landon didn’t sit on the quilt with her when he joined her but sat on the grass beside it showing respect for her space.

The next time they meet is when Alka tells Landon that she is pregnant and they agree to marry. There is trouble when Landon finds out that Alka has been beaten by her father and they fight with Landon trying to cut out the soul of Alka’s father only to find that he doesn’t have one.

They lead a transitory life, seven children later settling in Breathed finally in a house no one else wants. Betty is the sixth child but not the last and it is here in this house where she grows up. Being a mixed race child was not easy in the 50s in America and Betty is the child that most looks like her father who is of Cherokee descent.

What I loved most about the book was Betty’s relationship with her father. He was a natural born storyteller with just the right explanation about natural occurrences for every occasion and Betty lapped these stories up. He is probably the reason Betty survives and is able to leave the household to live a different life.

“Lightnin’ is the devil bangin’ at heaven’s door,”. “Throwin’ his whole body into it with so much force, he cracks the sky. But the devil only knocks on the door of heaven when it storms.”

“So the rain will hide his tears as he bangs at his father’s door, beggin’ to be let back in.”

The book has many themes but one that stuck with me is how trauma can be passed down through families. Betty’s mother, Alka, is traumatised not just by the beatings from her father but also from the sexual abuse which her mother aids and abets. Throughout Betty’s childhood Alka has times when she is not well but she is also the one who tells Betty about what she can expect at the hands of men and it is deeply depressing. Towards the end of the book Betty witnesses her older sister Fraya being abused by their eldest brother Leland and eventually Betty confronts him with the knowledge about what she saw and the fact that his father is actually his mother’s father their Grandpappy. This is a real turning point late on in the book where Betty finds her voice and sees her brother off, never to return.

The children are all creative, Fraya likes to sing, Flossie to act, Trustin to draw and Betty likes to write stories and this is another support in her survival. She writes about what she sees but the real horrors of her stories are placed in jars and buried under the stage their father created for them. It is well known that writing can be cathartic and a way of dealing with trauma but it is also Betty’s escape.

This book reads as if it is fiction as a memoir, particularly when you find out that McDaniel’s mother is called Betty and of Cherokee descent. It is a must read book!